Puerto Rico had high hopes of piggybacking on the federal opportunity zone program given 98% of the island lies in distressed areas which are covered by the zones and qualify for tax breaks on new development.

But four years after the federal law was enacted, the local government has approved only one opportunity zone decree and it’s in the heart of the capital city’s financial district: Banco Popular, one of the island’s largest banks, is getting the tax break on a commercial real estate development project in San Juan, financed with a $200 million fund, the government confirmed.

The bank’s “Campus Popular” project would occupy two vacant lots in Hato Rey, San Juan, where La Milla de Oro (The Golden Mile), San Juan’s central financial district, is located. It’s where some large financial players, including the island’s fiscal control board, have their offices. It’s also a 10-minute walk from struggling neighborhoods with thousands of blighted housing units that are routinely flooded by the waters of the Martín Peña Channel.

The bank confirmed it had received government approval but declined to provide details, saying it would announce its project Tuesday.

Puerto Rico’s sluggish—and critics say, misguided—effort to use its local opportunity zones to stimulate economic development or create jobs are an echo of problems with the federal program itself, which was created through the 2017 tax law. The program approved by Congress—now available in more than 8,700 designated census tracts—has been criticized for providing tax breaks to bolster projects in already emerging neighborhoods that would have been developed without them.

With provisions of the federal program set to expire in 2027, a group of bipartisan lawmakers are pushing legislation to expand the program by two years and increase reporting requirements. The new bill would also reopen the opportunity zones map to allow areas that are not currently eligible. The prospects for the measure are currently uncertain but could gather steam later in the year, as lawmakers try to address expiring and expired tax provisions.

Puerto Rico, like at least seven U.S. states, tacked on regional tax incentive sweeteners to opportunity zone applicants, typically requiring more disclosure to qualify. But the local opportunity zone committee limited the pool of projects to focus on “property development,” whether for sale or lease, including housing and hospitals.

“The legislation did not bring the expected benefit,” said Kenneth Rivera, the former president of the Puerto Rico Chamber of Commerce. 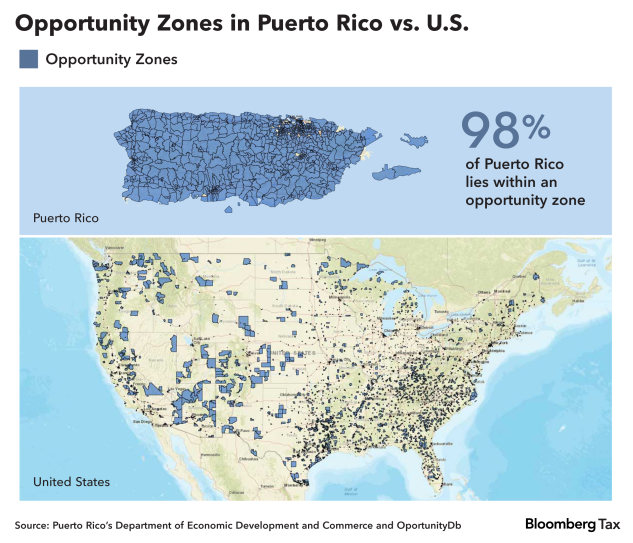 In 2019, then-Gov. Ricardo Rosselló Nevares enacted the Puerto Rico Act for the Development of Opportunity Zones for Economic Development, which was later repealed and consolidated with dozens of other tax exemptions and incentives in the Puerto Rico Incentives Code or Act 60.

The law establishes a 15-year decree, which grants tax exemptions during the period. Holders of opportunity zones decree pay 5% contribution on net income and withholding tax on net earnings, and receive 100% exemption on dividends or distributions. Under the local program, businesses also have exemptions on municipal licenses, municipal construction taxes, and a real estate tax exemption.

Community organizations have denounced that the structure of opportunity zones does not include a perspective of community economic development that guarantees housing protection for impoverished people. It only requires that the investment is made within the designated low-income communities.

“The government is giving substantial tax incentives with the idea that these people will develop the economy, but it is an economic development that translates into the inability of people to live in their communities,” said Ariadna Godreau-Aubert, executive director of Ayuda Legal Puerto Rico, a non-profit that provides free legal education and support to low-income communities.

For Godreau-Aubert, it is unacceptable that the island’s opportunity zone committee has no community members or organizations, with only public officials and agency heads among its seven members.

Ayuda Legal Puerto Rico sent a letter to the government in 2020, stating that opportunity zone projects would increase property costs in the communities and residents would face the threat of forced displacement.

Asked about regulation, Carlos Fontan, the director of incentives at Puerto Rico’s Department of Economic Development and Commerce, said the government could not audit applications at the early stage of the projects.

“Once a project is finished, they have to file an annual report and we will know if they comply with the investment requirements established,” he said. “If they do not comply, the decree can be revoked.”

Fontan said the program is off to a slow start because it’s new and has been hindered by the Covid-19 pandemic.

“We are optimistic because there was an increase in applications from 2020 to 2021, and historically incentive programs take a while to generate interest,” he said, estimating the overall investment in the 23 applications in 2022 at about $560 million.

Martha Quiñones-Domínguez, professor at the University of Puerto Rico and former president of the Puerto Rico Association of Economists, said that many investors see greater benefits in other incentive programs included in the Puerto Rico Incentives Code.

Fontan, the government spokesperson, agreed. “For example, it is easier to start a service export business than real estate development and all that goes with it, beginning with creating a fund.”

The IRS’s statistics of income division said there is no Puerto Rico breakout of investments via opportunity zones in Puerto Rico. Novogradac, which publishes its Opportunity Zones Investment Report and tracks 1,400 qualified opportunity funds, said they also don’t have Puerto Rico-specific numbers.

Quiñones-Domínguez said that Puerto Rico is attractive to foreign investors for tax-exempt reasons rather than as a place to invest for in increasing their wealth. “Investors come to Puerto Rico to evade taxes,” she said. “They go to the U.S. to maximize their return.”

María de Los Ángeles Rivera, a tax partner with Kevane Grant Thornton and member of the Board of Directors of the Puerto Rico Builders Association, said she has “seen a surge in interest in opportunity zones” but acknowledged that time is of the essence, as investments have to be made before 2027 unless Congress extends the benefits.

“We have four years to attract investment,” she said.

War and Ethics: What Are the Investment Community’s Responsibilities?

ADT Draws More Than $1.5 Billion of New Investments From…