Meta Platforms: Despite Bounce, Facebook’s Stock Could Be In For More Ugly Action


This article was written exclusively for Investing.com

As of May 2, the US Census website reported that the worldwide population stood at around 7.893 billion. As of the end of Q1, the number of Facebook monthly active users stood at . I find it incredible that 37.25% of the planet’s population visits Facebook at least once a month. It is even more shocking that 66.7% of the active users logged in each day during Q1 2022.

CEO Mark Zuckerberg and his staff of programmers found a way to monetize the platform by collecting personal data and selling it to advertisers clamoring to reach its nearly 3 billion users. On May 2, Facebook’s parent company, Meta Platform’s (NASDAQ:) market cap stood at the $560-billion level, far below the company’s valuation when the stock reached a high of $384.33 in September 2021. Zuckerberg may take only $1 in salary, but he owns approximately 12.5% of the outstanding shares, worth nearly $64 billion.

Meanwhile, the chart above shows that Zuckerberg and his wife sold $17.52 billion of FB shares from 2012 through 2021.

Last year, on Oct. 28, Zuckerberg changed the company’s name to Meta Platforms, to reflect his faith in the Metaverse’s future. Unfortunately for shareholders, the stock has done nothing but drop since he paid homage to virtual reality. The trend is always your best friend in markets, and it remains bearish for FB shares despite the recent bounce.

I have not had a FB account for years as I object to providing my data for the company’s benefit.

In 1837, Hans Christian Anderson published a cautionary tale about two poor weavers who made a fool out of a king and his entourage in the “Emperor’s New Clothes.” The story could be an analogy for the ongoing FB saga.

Market Cap Cut In Half Since September 2021 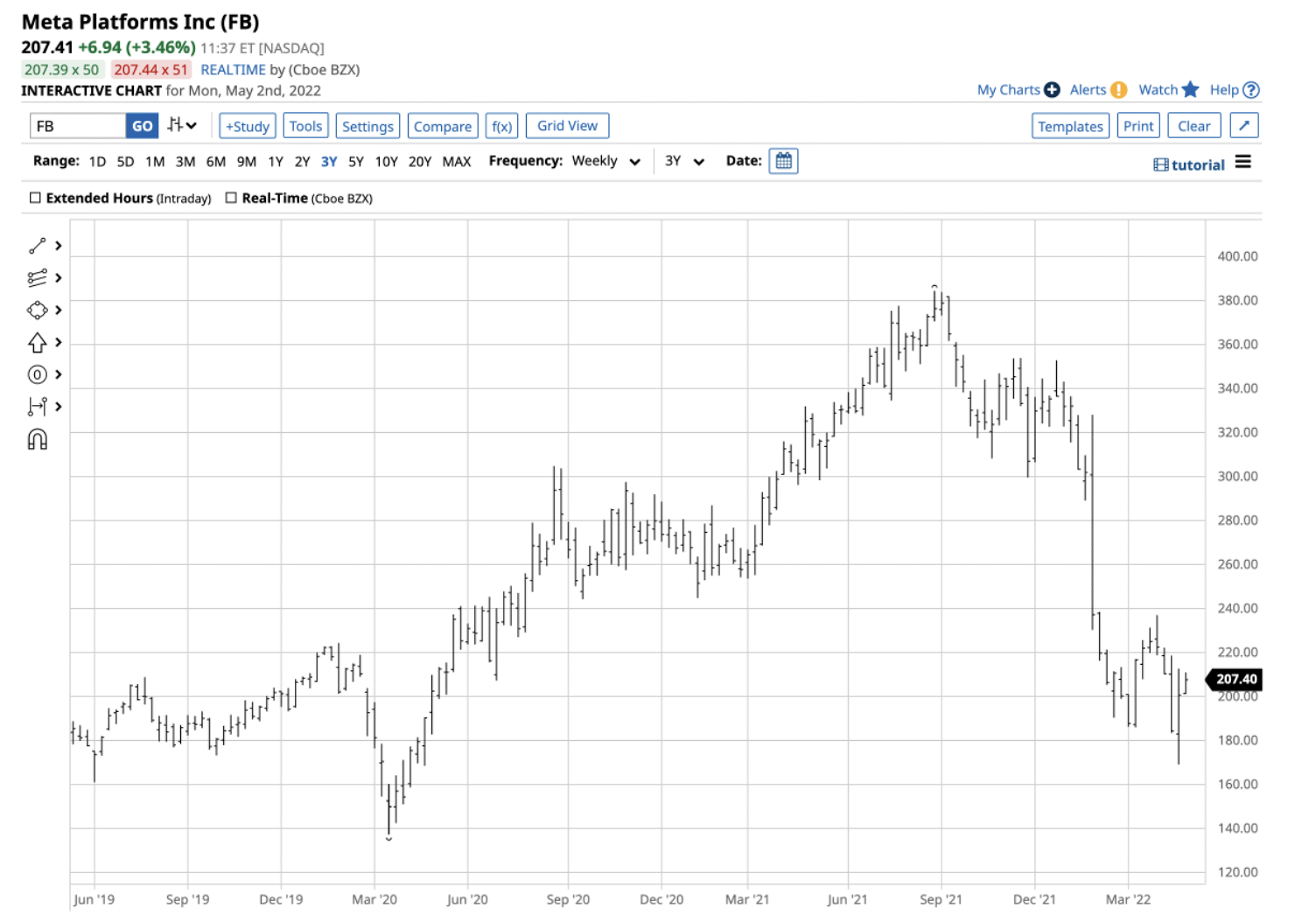 The chart highlights the decline that took FB to a low of $169 per share last week before the company released its Q1 2022 . FB shares plunged after a rare earnings miss for Q4 2021 as well as the revelation that user growth had reversed. 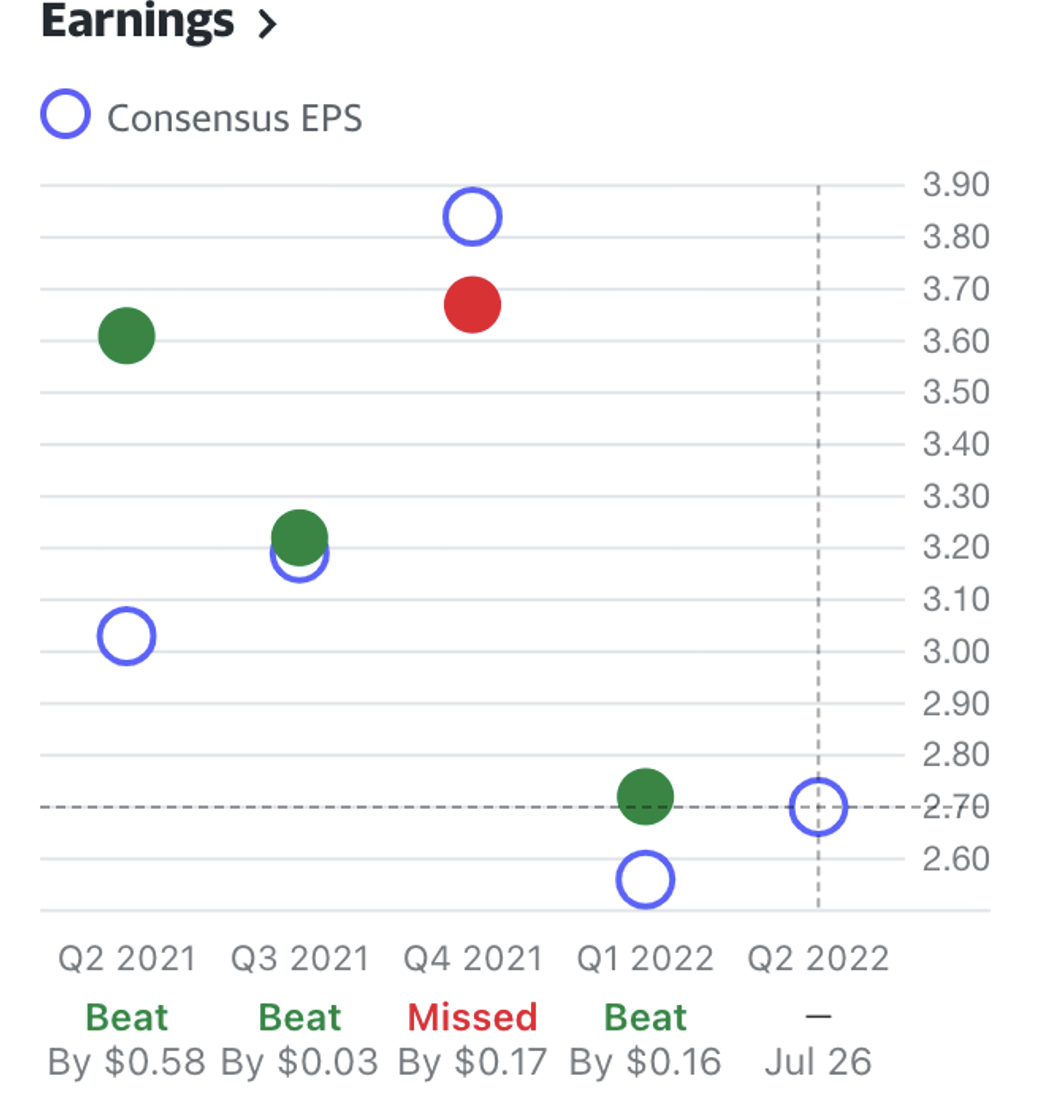 When Facebook rebranded and changed its name to Meta Platforms on Oct. 28, the stock was at the $325 level, near the highs. Zuckerberg made a massive wager on the metaverse, which has not been good news for shareholders. Based on the stock’s performance, Zuckerberg is standing alone in the metaverse without investors following. Time will tell if the shift is brilliant or if it was a bearish watershed event.

Meanwhile, FB has been the poster child in the crosshairs of legislators in the U.S., European and other countries who object to the company’s use of private user data. FB has also been battling with the world’s leading company Apple (NASDAQ:) over Apple’s app tracking transparency feature. In early February, FB said that the feature would decrease the company’s 2022 sales by approximately $10 billion.

Still, FB has taken steps to rebuild its advertising business after AAPL’s privacy crackdown, doubling down on shops and click-to-message units that drive users to act without leaving the FB platform.

At the same time, Zuckerberg’s vast political contributions during the 2020 election continue to be a source of concern.

Rising interest rates have weighed on the stock market in 2022, with all the leading indices down for the year. Weak stocks tend to do worse than the benchmark indices during bearish periods. FB has underperformed the tech sector, as the fell 23.8%, from a record 16,212.23 high to the 12,360 level. Meanwhile, FB is sitting over 46% below its record high after the recent bounce to above the $200 level. FB had a good Q1, and the stock recovered, but it remains a weak link in the stock market.

Additional pressure comes from a rising , which is bad news for multinational companies. A continuation of regulatory issues, rising interest rates, and a strong dollar could cause problems for FB shares during downdrafts in the overall stock market, since the weak tend to get weaker.

Elon Musk, the world’s wealthiest person, founder of Tesla and leader of a growing corporate empire with the most recent addition of Twitter (NYSE:) to his portfolio, had some interesting comments on Zuckerberg’s role at Meta Platforms. Zuckerberg owns the majority of FB’s voting shares with the company’s dual share structure. Musk compared the FB CEO to a monarch, saying:

“As for media sort of ownership, I mean, you’ve got Mark Zuckerberg owning Facebook and Instagram and WhatsApp, and with a share ownership structure that will have Mark Zuckerberg the 14th still controlling those entities.”

With a 55% ownership of FB’s voting shares, Zuckerberg has absolute veto power over other shareholders regarding the company’s strategic direction and future.

The bet on the metaverse, the company’s PR problems, privacy issues, the dual share voting structure and recent stock market action could make for a rough ride for FB shareholders.

The Curse Of Management Holding On Too Tight

A company needs to decide if it is public or private. FB has been walking a fine line between a publicly-traded company with access to capital markets and a private concern, where the majority owner has total control. There is no room for activist investors who operate in the interest of all shareholders at FB.

Zuckerberg had his best day ever last week when the company surprised on the upside with the latest earnings report, adding $11 billion to his net worth. However, his control—which has been a blessing for his personal net worth over the past years—could become a curse in the future. 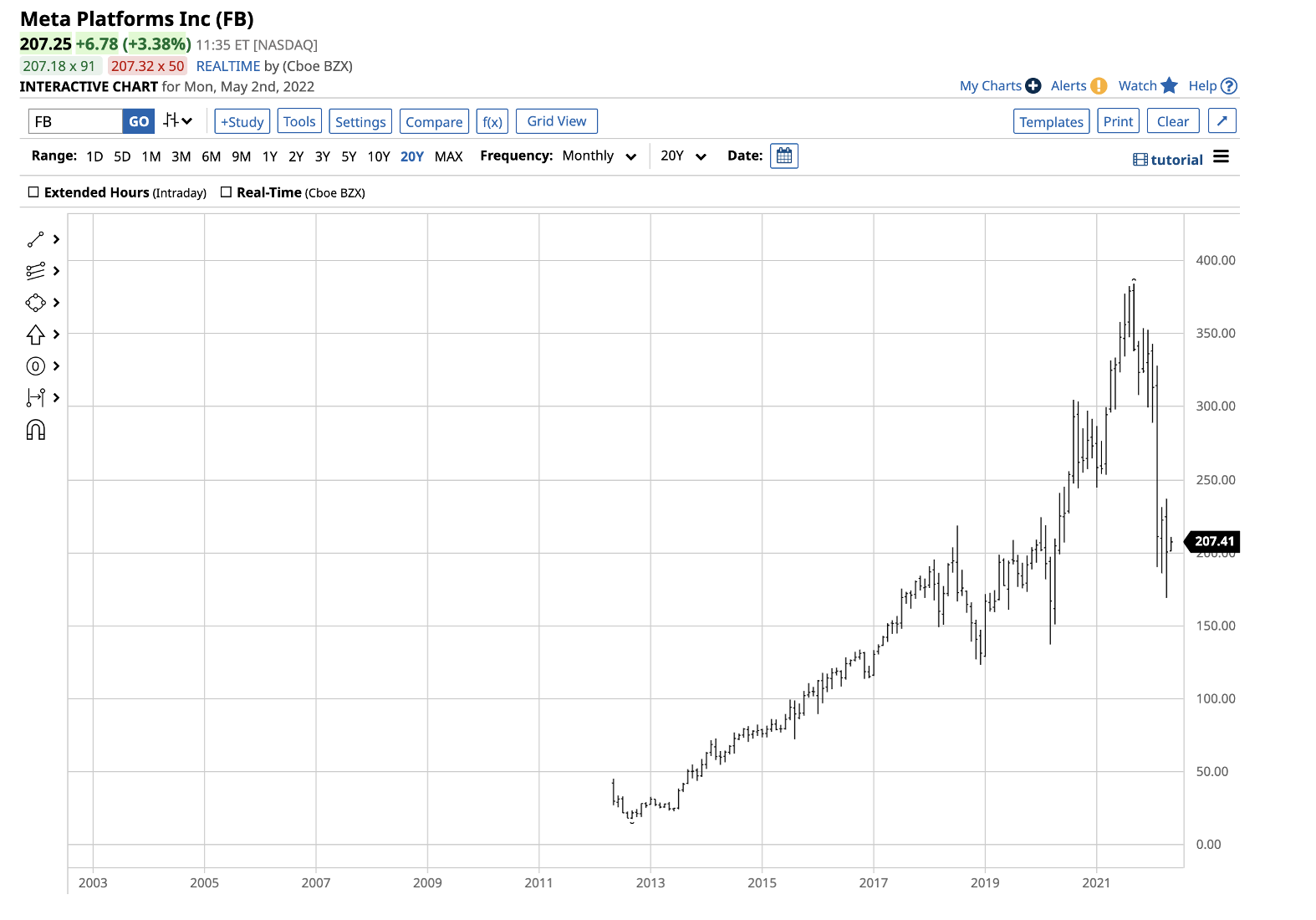 The bullish trend in FB shares from 2012 through September 2021 came to a sudden end earlier this year. Time will tell if Zuckerberg can change the market’s sentiment toward the company and the stock or if he’ll end up standing alone in the metaverse with a company whose heyday is in the past rather than the future.

FB faces many roadblocks, but the most significant could be what Musk calls its “monarchy” ownership structure. That makes Zuckerberg the king.

Time will tell if Hans Christian Andersen’s tale has a modern-day application for Zuckerberg and FB. The stock’s trend indicates the king could now be operating naked.

Looking to get up to speed on your next idea? With InvestingPro+ you can find

And a lot more. Get all the key data fast so you can make an informed decision, with InvestingPro+. Learn More »

The Courier and Local Delivery Services Market is expected to grow by $ 26.66 mn during 2022-2026, accelerating at a CAGR of 4.25% during the forecast period

Mattel – I Don’t Want To Play Yet (NASDAQ:MAT)

OPEC and Russia to Meet, With a Big Cut in Oil Output on the Table

As Trump’s Legal Woes Mount, So Do Financial Pressures on…

The Global Micro Lending Market is expected to grow by $…