“Don’t Be Bearish.” The Inevitable End Of Bad Advice

“Don’t be bearish.” That was the message delivered by a Wall Street Journal article in August 2021, discussing the “new generation” of “financial media stars.” To wit:

“As the U.S. retreated amid the pandemic to its couches, millions of would-be stock pickers—some flush with stimulus cash—fired up social-media and messaging apps and dove headlong into the world of retail investing.

Many of these influencers have no formal training as financial advisers and no background in professional investing, leading them to pick stocks based on the whims of popular opinion or to dispense money-losing advice.”

Since young investors wanted a “quick and easy” roadmap to make “big profits,” these online “stars” doling out free advice was the perfect source.

However, such should be no surprise given the near-vertical market advance from the 2020 lows. Young investors have increased financial risk with the “Fed” providing insurance against loss. We have noted some of these stories previously.

As we noted then, the actions of retail investors were all too reminiscent of what we witnessed leading up to the “Dot.com” crash. However, you can hardly blame them, given this is the only investing environment they have ever known.

But therein lies the rest of the story.

Only One-Half Of The Story

According, to the article, there are only 3-rules you need to know to be a “social media financial star.”

In other words, if you are applying for a job, the sign states: “Don’t be bearish. No experience required.”

Generation Z, born between 1992 and 2002, was between 5 and 16 years old during the financial crisis. Such is an important point because they have never truly experienced a “bear market.”

Any advice they might have received from financial advisors suggesting caution, asset allocation, or risk management was repeatedly proven to underperform the market.

Such led to a severe case by retail investors who demanded a bullish bias. To wit:

“Like most internet content, influencer videos thrive on popularity. And in the midst of a long-running bull market, what’s popular are success stories and hot tips only.

Many influencers report that when they hype an investment, they get the page views they crave. When the message is bearish, however, viewers turn away, or worse, attack the messenger with vicious trolling.“ – WSJ

The problem with the “don’t be bearish” bias should be evident. Only listening to one-half of the story makes investors “blindsided” by the other half.

“We know that day trading does not produce long-term wealth for the vast majority of people who do it, but these influencers are preying on that part of the human brain that has fewer inhibitions, that thinks: ‘I will be the exception.’ That leads to speculation and other kinds of very high-risk behavior.” – Ted Klontz, Professor Of Behavioral Finance, Creighton University.

The demand by Gen Z’ers for “don’t be bearish” commentary is why they ignored the same signs that negatively impacted both Millennials and Boomers previously.

It Was Fun While It Lasted

Today’s problem for young retail investors is that the markets “defied logic” so often that it became synonymous with “crying wolf.” Sure, valuations are historically expensive, but “so what.” The Fed is continuing to push monetary accommodation.

“Don’t be bearish.” Yep, it was fun while it lasted.

Since the middle of 2021 and continuing in 2022, the speculative fervor of retail investors chasing stocks like AMC Entertainment Holdings (NYSE:), GameStop (NYSE:), Bed Bath & Beyond (NASDAQ:), and many others, ended just as expected.

As the table below shows, of the 700 companies screened with market capitalizations above $7 billion, the 120 companies showed the most price destruction from their 52-week highs.

Many were the “meme stock” favorites like Zillow (NASDAQ:), Zoom Video (NASDAQ:), Pinterest (NYSE:), Netflix (NASDAQ:), etc. These companies are down 33% or more from their 52-week highs. 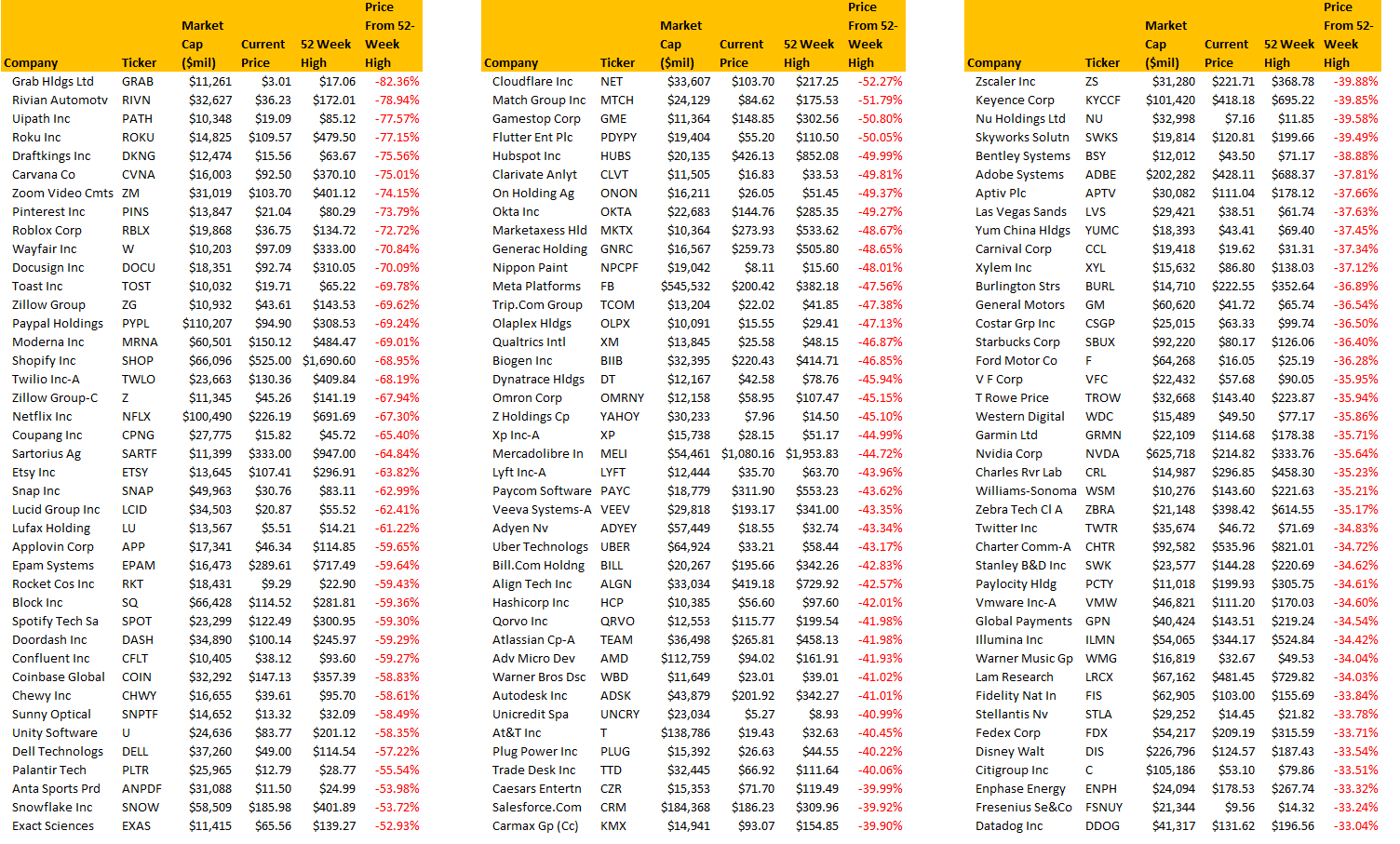 The following table below shows the 81 companies with the largest market capitalization. You will note many companies that are down significantly more than the index in 2022.

Companies like NVIDIA (NASDAQ:), Facebook (NASDAQ:) (Meta), Salesforce (NYSE:), PayPal Holdings (NASDAQ:), Qualcomm (NASDAQ:), and even Tesla (NASDAQ:) are down 20% or more from their 52-week highs. 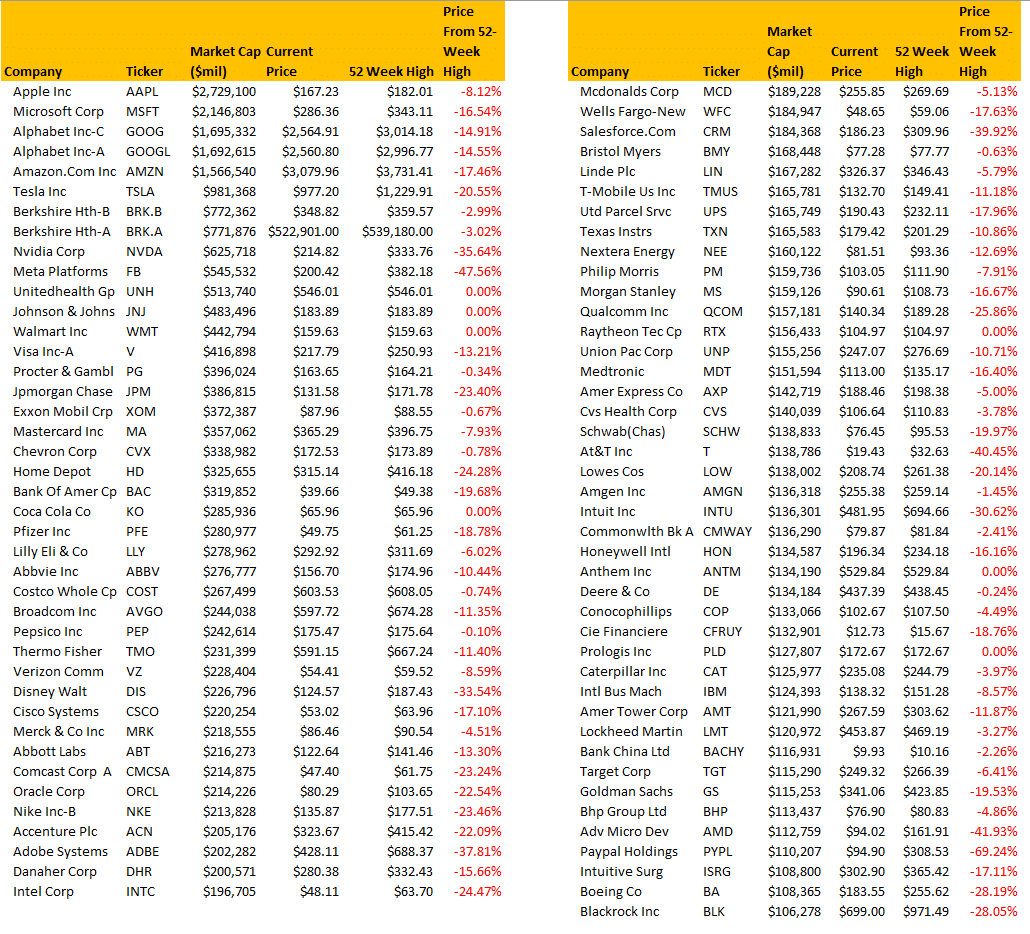 Of course, that destruction of capital weighs on investor sentiment. While retail investors enjoyed the liquidity-induced “feeding frenzy,” many have now suffered a severe “bear market” in their portfolios.

Not surprisingly, investor sentiment is at levels most often associated with more significant corrections and major bear markets. 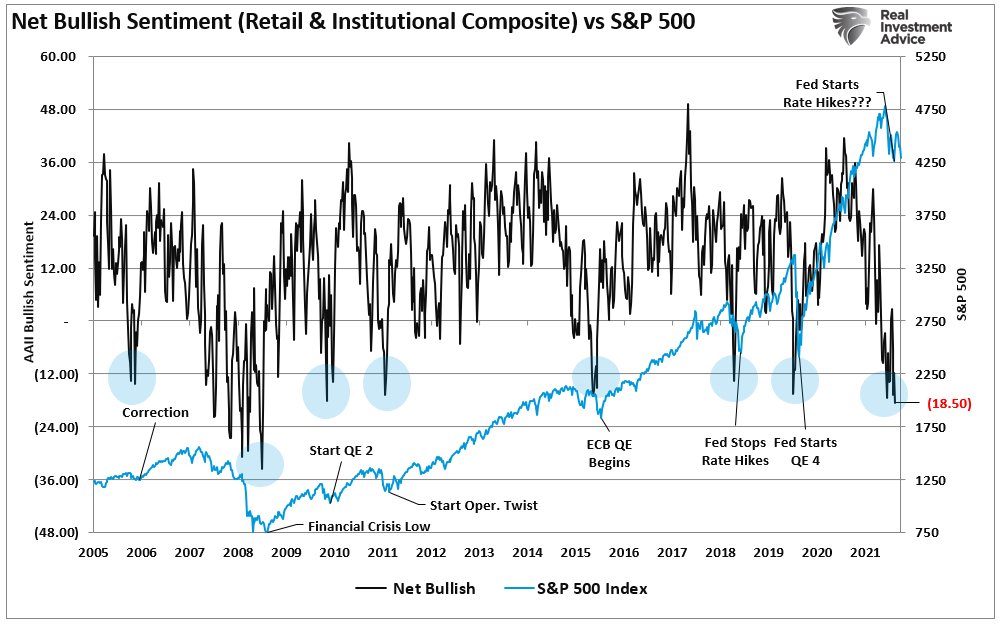 We Tried To Warn You

As noted in our previous posts, the action by young retail investors was understandable. Flush with a “stimmy” check and a trading app, the “Wall Street casino” was open for business.

However, the outcome of young investors approaching the market with a “can’t lose” attitude was evident. While social media stars “got rich” for their free “don’t be bearish” investing advice, it is worth noting their “riches” didn’t come from their investing skill.

Instead, it came from their skill in producing products and ads. Such is not much different than how Wall Street makes its money.

Experience tends to be a brutal teacher, but it is only through experience that we learn how to build wealth successfully over the long term.

As Ray Dalio once quipped:

Such is why every great investor in history, in different forms, has one basic investing rule in common:

The reason is simple: you are out of the game if you lose your capital.

Many young investors have gained a lot of experience by giving most of their money to those with experience.

It is one of the oldest stories on Wall Street.

So, while Millennials were quick to dismiss the “Boomers” in the financial markets for “not getting it.”

There was a more simple truth.

We have been around long enough to know how these things eventually end.

The Global HVAC Rental Equipment Market is expected to grow by $1.43 bn during…

Is College Worth It? Not for Everyone

Federal regulators are preparing to pass judgment on Ethereum

The Best Defense Against the Energy Weapon: Big Oil