Cash Stuffing: What It Is and Why It’s So Popular With Gen Z 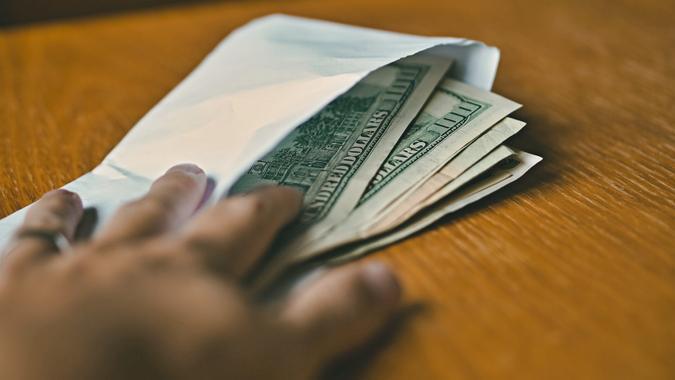 Every generation looks at the younger generations and scratches their heads, noting differences that often feel miles wide. Generation Z, those born between 1997 and 2012, is definitely doing things differently than older generations, especially when it comes to money.

Know: 9 Bills You Should Never Put on Autopay
Save: Unplug These Appliances That Hike Up Your Electricity Bill

These youth, who have been born into a digital age and utilize social media with a fervor their older peers don’t understand, have also grown up during some tough economic times. They’ve watched their parents weather a massive recession, followed by a pandemic, and they don’t want to make the same mistakes, according to Forbes.

Inspired by Tik Tok influencers, one money trend that seems new, but is actually a throwback to simpler times, is “cash stuffing.” It’s pretty much what it sounds like: dividing up your income into physical envelopes marked for different expense categories and stuffing them with money.

“Cash stuffing is a financial strategy that involves saving cash instead of investing it in order to best inflation,” says Harry Turner from The Sovereign Investor, an investing and trading education website. “This strategy is especially popular with Gen Z…who are often saddled with student debt and uncertain job prospects. So by stashing away cash, they hope to safeguard their finances against an uncertain future.”

There are different approaches to it. Some people put money away where they’ll “forget” about it, Turner says, making them less tempted to spend it, such as in a shoe, under a mattress or in a jar in the back of the fridge.

Other people are more strategic about it — according to Bill Lyons, founder, CEO and President of Griffin Funding — by dividing their income into different envelopes or binders and then putting specific amounts in these each month. “The idea is that you are only spending physical cash and have pre-divided funds for each area you might be spending in. Essentially, because it is a technology-free and simple methodological way to budget and plan finances, it feels safer for Gen Z that lacks faith in traditional banking and government systems.”

Life Insurance Offer: Instant coverage upon approval. Get a quote in seconds and apply online in minutes. No medical exam ever – ages 18-60.

In a practical sense, it’s also a way to always know how much money you have upfront, Lyons explains. To break it down ever more, here is why cash stuffing is becoming so popular.

It Helps Focus on Goals and Budgeting

While cash stuffing has really been around a long time, Kendall Clayborn, CFP at SoFi, understands why it is experiencing a resurgence. “Breaking down a larger saving goal that may take years to achieve into smaller, monthly goals allows you to stay focused and get those wins sooner, keeping you motivated.”

She also sees it as having a positive influence on budgeting in general. “You are setting aside time every month to review your finances, create a budget, and set specific goals for the month.”

One 20-year-old girl named Savannah told Buzzfeed it helps her to know how much she’s spending. “Compulsively buying unnecessary things is a hard thing to change, but with this method, since the money eventually runs out from the envelope, I can save easily,” she said.

Life Insurance Offer: Rates start at just $10/mo. No medical exam ever – ages 18-60. Get your quote in seconds and coverage in minutes, if approved.

It Reduces the Use of Credit Cards

Another reason Gen Z is cash stuffing, according to Frank Barber, business development and finance expert at Oxford Gold Group, is as a way to avoid debt. “When students avoid using credit cards, they save themselves from the possibility of incurring increased debt.”

Clayborne adds, “You can now only spend money you have available, currently preventing you from accumulating any more debt. I’ve seen this work especially well for people who currently have credit card debt.”

It’s also a way of getting ahead of inflation.

What Are the Downsides?

One downside to this approach is that not using a credit card can harm one’s credit score. In addition, Alvin Carlos, CFA and CFP, financial planner and managing partner with District Capital Management, says, “You’re not getting cash or travel rewards. And you can’t pay for everything in cash. If you want to watch a concert, you’ll need to buy tickets online in advance.”

Physical cash has another serious downside, according to Laura Adams, a personal finance expert with Finder.com. “One is that cash can get lost, stolen, or destroyed and isn’t covered by homeowners or renters insurance.”

Clayborne adds, “Another con is that shuffling cash between your home and the bank to cover debit or credit card charges for online purchases isn’t convenient. Plus, you don’t have an electronic record of your transactions or the ability to build credit by using a credit card responsibly. You also miss out on credit card rewards, such as cashback, purchase protections, and extended warranties.”

At this stage in the lived of many Gen Zers, cash stuffing may still be worth a try to develop good budgeting and savings habits. Michael Ryan, a financial advisor at MichaelRyanMoney.com, says, “As someone who promotes financial literacy every chance I get, I don’t care what people call it — as long as it helps promote good financial habits, I am all for it. As professionals sometimes we over-complicate finances. When you look in your wallet and pay with cash, it is a very simple decision.”

Alternately, Clayborne points out that you can achieve the same goals of cash stuffing with multiple separate bank accounts, and in that way you can just automate savings. “By not seeing this money in your checking account, it can make you less tempted to spend it.”

Jordan Rosenfeld is a freelance writer and author of nine books. She holds a B.A. from Sonoma State University and an MFA from Bennington College. Her articles and essays about finances and other topics has appeared in a wide range of publications and clients, including The Atlantic, The Billfold, Good Magazine, GoBanking Rates, Daily Worth, Quartz, Medical Economics, The New York Times, Ozy, Paypal, The Washington Post and for numerous business clients. As someone who had to learn many of her lessons about money the hard way, she enjoys writing about personal finance to empower and educate people on how to make the most of what they have and live a better quality of life.

The Global Bipolar Forceps Market is expected to grow by $ 250.2 million during…

As Trump’s Legal Woes Mount, So Do Financial Pressures on…